“You are a f***ing bore person.” A known middle aged lady taunted or teased me. I dunno.

Out of 50 posts, which post you liked the most and which you couldn’t complete without yawning?
at March 27, 2010 36 comments:

One side of the hill:
“Before going, do the kuchi puchi. Say ‘I LOVE YOU’.” Asked a lady wearing churha (bangles wore just after the marriage) to her hubby. Her husband was not going on a war for the sake of country rather he was going for an aerial adventure with extra security measures on steel cables between Aravali hills which is better known as zipping. What a difficult task he has to perform!

After reaching the other side:
“I was so scared till you reached here safely.” Saying this, hubby lovingly kissed his wife.

They did all; hugs, kisses and love bites except ……

Are newly weds are licensed to do all this on public places? Or do you think I live in eighteenth century? :-D
at March 25, 2010 39 comments:

Chemistry between husband and wife

“Half kg refined oil.” A lady read out from the list of items written on a paper in her hand. She was purchasing monthly ration from a reputed store in a town. “Is it good?” She said looking doubtfully at the colourful packet handed over by the shopkeeper. “It is of the best quality.” Shopkeeper tried to convince her. She turned around and gave a confused look to her husband who was sitting behind on a chair. He beamed. He came close to her and softly took the list from her hand and started ordering the items from the list.

Is husband loving and caring or wife too much dependent on him who can’t even buy daily household items?
at March 23, 2010 35 comments:

Even i saw many camels in my city visakhapatnam at beach where people are showing intrest to ride on it and having joy , at evenings in our beach u can find some 6 to 7 camels in our hometown beach , Coming to need of camel sanctuary , i can say camels can dwell well at coastal beachside towns rather than in deserts bcoz they can get food easily without any difficulty and get maintaince cost easily in beachside towns where as in deserts u will find it difficult for camel tammers to maintain it.....so i regard there is no need of camel sanctuary to save camel !!!! Mar 14

If all camels will be living on sea shores then there will be no need to roast fish before eating. :-D 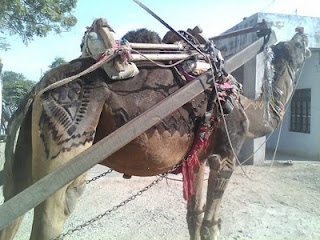 "When I was kid, I used to call all my cousins from Delhi to visit my place. I invited them for camel viewing. We used to enjoy their rides and had great fun with their young ones." A young guy narrated me when I visited a small town in Rajasthan.
"With the rapid industrialisation of this town, from the past one year I haven't seen single camel here." He informed me gloomily.
Seeing sadness on his face I couldn't resist smiling as he got married only a year before. :) 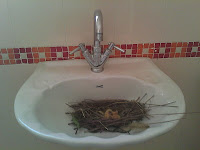 Back from a vacation, exhausted with a long journey, I entered the toilet of my house to freshen up my face. Some new faces greeted me in the wash basin. Aha!! New tenants without the permission of landlord! I am sure they won’t pay the rent until I file a case on them. :-D

On a social networking site, a reputed doctor instead of putting on view his photo in profile, he posted a photo with a board on which in red bold letters was written ‘DON’T PANIC’. The board didn’t read in microscopic words ‘On seeing my bills’. :-D

I wanna know on seeing a doc how does one feel; start shivering that he will be giving injections and bitter medicines or have a feeling of relief that now the painful disease will be cured?