One day, we were studying a serious topic in the class about the Vedanta philosophy when she noticed a big monkey passing by the corridor at a distance. She was happy like a child. She was excited. It seemed that if she wanted to have a selfie even with that monkey!

Three days before the examination day, she prepared a mock paper which she solved with some of her friends. I was surprised rather shocked to see her uttering all the Sanskrit terms correctly along with their meanings whereas in the class she was not able to understand some of the words in English. To help her, one of her friends translated the difficult words in her mother tongue for better understanding. In the busy schedule of one class after another, surprisingly she found time to click selfies as well as to mug up complex words and theories whereas I couldn’t find time for both.
at September 26, 2016 No comments:

On my first day in hostel sort of thing, I met a dark n fatty woman who smelt more like a cigarette, a smell that I hate the most! Her face expressions and gestures clearly showed that she was depressed. Most of the questions she asked me were irritating, confusing and weird which most of the time gave me a feeling that she was trying to read my psychology. One more thing that I hate! You won’t believe me but she stunk even after bathing thrice a day. Her presence in my room gave me a feeling that I was living with a ‘Buffalo’.

‘Buffalo’ played a musical instrument once in a while but that sounded horrible. She never flushed after using toilet and if by chance she used it then for sure the flush handle will be jammed. She never closed the door of toilet before and after using it. Whenever I entered the room I found her either sleeping, eating or applying cream or some fruit pack on her face. After eating fruits, she put the fruit peels on the window sill. I found it difficult rather very hard to adjust with her. I was irritated with her dirty actions and my mind was busy thinking about her and her unclean manners. I was fed up with thinking about her.

One day while meditating I prayed to God, “O, God! I came here with so much difficulty You know that very well. I am here to practice yoga and to meditate to think about You and not her. Please help me so that I can adjust with the ‘Buffalo’. I believe whenever I have a problem God comes in the form of written words in a book or internet to guide me. On the very same day, I read a story about Swami Sivananda and Swami Vishnudevanada.

Excerpt from ‘Teachings on Yoga Life’by Swami Vishnudevananda are as follows which I read:-
One evening during silent meditation, there was a loud crash. Everyone looked up and was horrified to see a distressed disciple swinging an axe at Master’s head. Swami Vishnuji, sitting close to the Master, jumped up and pulled the assailant away from Sivananda in a great fury. Master told him later, “Vishnu Swami, you must learn to control your emotions.”
The assailant was taken to jail. But the next day, Sivananda took him fruit and flowers, garlanding his would-be assassin. He had him set free and set a disciple to accompany him home.
This incident was a great learning experience for Vishnu Swamiji. He saw that, to a Realized Master, God comes in many forms. To Sivananda, a person who would take his life was as much as God as a man who would come to garland him. He had great love for both.

Next day, I found the peels and pips on the window sill of our room as usual but my attitude towards them was changed. I told myself it was done by God. I cleaned them. I felt better after that, could focus easily on my goal and meditated beautifully.
at September 25, 2016 No comments: 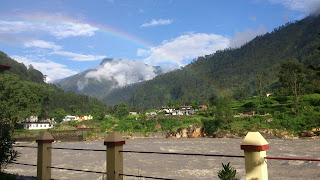 On my first day in Netala, Uttarkashi the rainbow appeared on the eastern sky in afternoon. The sun was bright; sky was bit cloudy so the arc formed was quite big with distinct colours. It seemed as if the rainbow was smiling and saying ‘Hi’ and welcoming me to the new world which was calm and serene. It was a pleasant surprise that nature had to offer me. 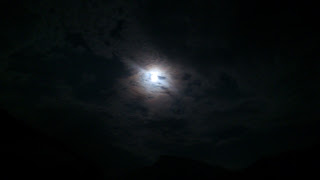 On my last day in Netala, Uttarkashi the rainbow appeared around the moon. It was a cloudy night and the moon rays get scattered around in a circle. It created a dim rainbow in which the red colour was more prominent. It seemed that it whispered ‘Adieu’ to me. A mesmerising view indeed it was!

In Hindi, we call it ‘chanda ka hala’. In English I don’t know the exact word for the rainbow around the moon. Does anyone know what it is called?
at September 24, 2016 No comments:

I always wonder when I will get back home after my educational vacations in Uttarkashi, what I will write about. So many experiences to share, so many persons about whom I wanted to write and so many places I had visited whose attractiveness I wish to blog about. It was my first experience to be away from my home and family. On the first day, I was excited and not at all nervous rather too curious to observe the nature and new people around me. But I will share these experiences later on as I want to begin with my last day in Uttarkashi which touched my heart the most.

Quite surprisingly, I made a new friend in just few hours on that day, contrary to my nature that I am too reserved and too shy to open up with new people that it mostly took me years or a minimum of a month to be friend with someone. What I liked about this person was his sense of humour, his quick replies and his melodious and pious voice which I wanted to hear again and again. In a satsang, he chanted, ‘Om Namah Shivaye, Shivaye Namah Om’ so beautifully and devotionally that my eyes became moist as I was absorbed in the chants and felt the presence of Lord Shiva in those magical words. I had never heard anybody singing so devotionally ever before! And I had never made a friend so quickly!
at September 21, 2016 No comments: