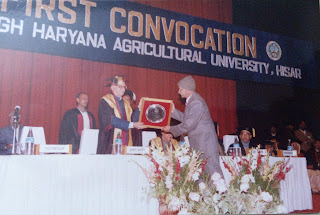 My father, Dr. Madan Lal Saini was the most hardworking person I ever knew! He worked near about 18 hours per day. He never took any break from work. In his life, there were no holidays. Even during festive time like Diwali or Holi he was busy working while the rest of the world was busy in enjoying lights and colours. In spite of whatever happens in the world, he strictly followed his working routine.


His hard work made him successful in academics as well as in business. He retired as Professor of Plant Breeding, CCS Harynana Agricultural University, Hisar. Earlier in his academic career, he was a bright student and always secured excellent marks in his school and college time. He was awarded Dr. V.K. Kashyap Gold Medal in recognisition of the best Ph.D. research worker for the year 1974. He worked on genetic improvement of gaur crop for about 12 years and remained associated in development and release of eight important varieties of guar. He was awarded ‘The Rafi Ahmed Kidwai Memorial Prize for Agriculture Research for the biennium 1982-83 for outstanding contribution in the field of plant breeding and genetics. Associated with wheat varitety WH542 and had been awarded ICAR Team Award for Multi-disciplinary Research in Agriculture and Allied Sciences for the Triennium 1994-96.


In the field of teaching, he guided four M.Sc. and seven Ph.d. students. He was awarded Best Teacher Award of the Department of Plant Breeding for the year 1998. He also received The Outstanding Teacher Award, a national award in teaching for the Biennium 1998-99 for outstanding contribution in the field of Plant Breeding and Crop Improvement by the ICAR.


He was selected for the prestigious B.P. Pal National Environment Fellowship Award for Biodiversity for the year 2002 by Government of India, Ministry of Environment and Forests, New Delhi to work on grasses and medicinal plants in arid region.


He wrote three books namely ‘Plant Breeding and Crop Improvement’ Vol I and Vol II and Practical Manual on Plant Breeding. He wrote near about 200 papers including research papers, review articles and popular articles.


In business, he was keenly interested in introducing new technologies, starting new projects and launching new schemes for the betterment of society.


Surprisingly he followed his working schedule punctually even after he fell sick. His poor health could not restrict his working hours. In the last days of his life, he was discussing business, suggesting innovative ideas to make money and guiding me to tackle problems.


He led a very simple and disciplined life. He was kind, honest and was always ready to help everybody in need.


With moist eyes, I said ‘Goodbye’ to him last night.

Photo : While searching album for his photo, I found the pics were mainly about taking awards, giving talks or researching in the field/ lab. There were hardly any photos with friends or relatives. So here is one taking The Outstanding Teacher Award from Mr. L.K. Advani.
at July 01, 2017